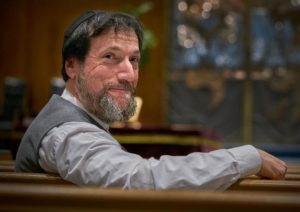 Rabbi Jon-Jay Tilsen has been the spiritual leader of the Congregation since 1993. A native of Mendota Heights, Minnesota, he is a graduate of Columbia College in New York, where he studied Political Science and Middle Eastern Languages and Cultures. He received a Masters degree and Rabbinic ordination from the Jewish Theological Seminary in 1991. While in Rabbinical School he studied in Jerusalem for three years. Rabbi Tilsen has four children, and resides in the Westville neighborhood of New Haven. Rabbi Tilsen is a member of the Rabbinical Assembly, the global organization of 1,600 Masorti-Conservative rabbis, and of the New Haven Area Rabbinical Assembly, the local organization of Masorti-Conservative rabbis.

See Divrei Torah and Other Writings by Rabbi Tilsen

10 American Rabbis You Haven’t Heard Of, But Should, by Yair Rosenberg,  Tabletmag.com   September 2015

A Message from Rabbi Tilsen

None of you shall go outside the door of your house until morning.  For when the Lord goes through to smite the Egyptians, the Lord will see the blood on the lintel and the two doorposts, and the Lord will pass over the door and not let the Destroyer enter and smite your home.

Though enslaved to the ancient Egyptians, our ancestors were largely spared the direct impact of the first nine plagues that befell Egypt.  They realized that of late their neighbors were having an even worse experience.  That notwithstanding, the Hebrews felt direct pain from those plagues and retribution from Pharaoh.

Then came the night of terror.  Moshe and Aharon, their unelected leaders supposedly working in their behalf at the command of the God of their ancestors, ordered the Hebrews to stay indoors under threat to their lives while the mashhit, the Destroyer, rampaged throughout the land, in a way beyond the experience of any living soul.  Everything Moshe and Aharon predicted had come to pass, but the result had been even greater stress and suffering for the Hebrews in Egypt – a result Moshe and Aharon had foretold, too.  While purportedly only the firstborn were the target of this new terror, everyone had to stay indoors.  Some sat alone, some knew they were highly vulnerable.  No one knew what would happen.

An unnamed sage long ago observed in the Mekhilta of Rabbi Ishmael that once the Destroyer is released, it does not distinguish between the righteous and the wicked.  Nor does it announce when it is done.  Violence, falsehood, exploitation, oppression, once released in a society, once used for a purpose no matter how worthy, tend to impact everyone.  Overthrowing the Shah of Iran, Saddam Hussein, Qaddafi, King George, the Czar, Assad of Syria, seemed like good ideas at the time – and perhaps they were – but the violence deemed necessary to depose them expanded without control or proportion.   Providing advanced weaponry to customers and allies might seem advantageous in the moment, but in the end often leads to more intense destruction.  Utilizing ad hominid attacks, mendacity and con artistry in place of logical, fact-based, compassionate and respectful discourse in government and politics, makes those forms not merely means to attain power and control others, but makes them the standard.

In retrospect it could have been largely avoided.  Surely if Joseph and his brothers had behaved differently long ago, had the Hebrews found a way to avoid or escape slavery before it became permanent, had Moshe and Aharon or perhaps other leaders among the people found a way to negotiate, or escape, or develop better relations, or just to plan for this great plague that everyone knew was coming – it could have been avoided.

But dayenu with what they should have done.  They quickly found themselves at the point where all they could hope for was to endure the night of terror, and stay indoors, to survive as the Destroyer ravaged the land.  They hoped merely to stay alive.

And so too with today’s plague, not the locusts devastating Eastern Africa, not the malaria that will kill 400,000 this year, not the opioids that will kill another 60,000 Americans, not the war displacing another half million people in Syria, and not the looming threat of overwhelming flooding for hundreds of millions who dwell near sea level – not those old plagues, but the new one that keeps us hiding in our homes, the one that brings a nightmare death to thousands and possibly tens of millions, and economic ruin to as many or more  – we probably could have done something.  The options to improve our medical care system, at least specifically crisis and pandemic response provisions, have been fairly well-known to those in the field for a long time, and while some aspects of preparation were done well, others were dismal and deadly failures.  There is no lack of dedication among our medical workers, but rather systemic deficiencies in our governance at some levels.

Some of us are beyond the wish to finger-point – and if I feel an urge to direct a finger, it is not my index finger.  Rather, to invoke the medically contraindicated metaphor, we need to point our whole hands, to reach out, to one another, to help, hug, reassure, to make it through the long night of fear, the night of waiting.  The organized mass flash clapping from the apartment balconies honoring and thanking medical workers in Israel, the children who finally agreed to wash their hands once in a while, the members wearing gloves to deliver groceries to neighbors, all attest to how we occupy our hands, that,  along with the “digital” communication that has temporarily replaced in-person meetings.  We are Jews.  We have faced a lot.  We adapt.

The response of local Jewish communal leaders, and certainly at BEKI, has been swift and substantial.  Many of our members have felt at least a little support, and many have worked tirelessly to create new vehicles of support and communication.  We are well-practiced in the mitzvot required to cope, though we know there are lacuna.  We know how to love and forgive.

Unfortunately, we are in a marathon, not a race, and we can reasonably expect that the worst is yet to come.  The night is early.

When the Destroyer finally retreated, perhaps in exhaustion more than satisfaction, when the cry that went forth from Egypt dissipated, the terror was gone.  It might have seemed like the nightmare was over, and things could return to normal.  But the journey of the Hebrews had just begun.  They had learned not to treat others as they were treated, not to develop a society based on exploitation and dehumanization.  They were guided by a pillar of fire and a cloud of smoke; they had a new direction, of return and of new adventure, a goal, a more favorable place ahead of them.  As their descendant would do generation after generation, they insisted on using their suffering and experiences to try to make things better.

Tears may linger for the night;
Joy comes with the dawn.