Love Me to Death Panel

A Letter to Senator Lieberman

I am writing today to ask your help in getting me appointed to a government death panel.

During the debates before the enactment of Obamacare, several leading public figures, mostly Republican, including Sarah Palin, promised that once the law came into effect, life-and-death decisions would be made for the elderly and infirm by government death panels.

From our personal acquaintance, you may know that I am experienced and credentialed in the realm of “who shall live and who shall die.” Beyond my rabbinic training and ordination at the Jewish Theological Seminary of America, I served for a summer as an intern (pastoral field worker) at Memorial Sloan Kettering Cancer Center in New York. During my nineteen and three-quarters years serving congregations in Connecticut, I have counseled hundreds of families facing death or grieving a loved one, have attended numerous individuals at their hour of death, and have prepared the dead for burial. I have experience in guiding families and medical workers in deciding whether to “pull the plug” and in the consequences of their decisions. 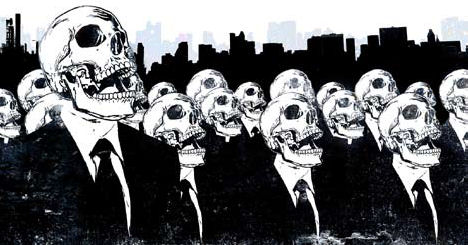 Beyond that, I already have begun working on a list of who is worthy to live and who is ready to sail out on the next iceberg, to use the Eskimo idiom. My opposition to judicial execution (the “Death Penalty”) is based on a lack of faith in the judicial system, not in a fundamental objection to the government killing people when required, so it should not stand in the way of my appointment. Unlike other local clerics and public officials, I have never actually been convicted of a felony, which makes me a stand-out candidate. I get along fine with most government workers, except the people at the CT DMV; I’ve even slept in Ben Bernanke’s bed, though he wasn’t there at the time.

Although the promise of government death panels was made by Republicans, I turn to you for help because you are the closest thing we have in Connecticut to a Republican, no offense, and because you are by all accounts highly regarded among your Senate colleagues. I would add that I once supported a Republican in his race for the Senate, and even though he was sentenced to one year of probation after his admission of misuse of public funds, I don’t regret supporting him, since his Democratic opponent whose name I won’t mention was even more of a scoundrel. I should hope that the death panels are bi-partisan, or even better non-partisan, anyway.

To avoid creating any appearance of favoritism, cronyism or conflict of interest, I pledge that if you help me in my quest I will never pay you back with a political or personal favor, or do anything that could be interpreted as supporting your career or otherwise compromising your appearance of independence, other than pouring you a small serving of fine single-malt whiskey should you happen to join us one day for qiddush as in days of old.