Congregation Beth El-Keser Israel seeks to be a model urban institution and to promote good citizenship among its members. The community seeks to comply with the Biblical law of bal tashḥit, which prohibits destruction of the natural environment and wasting of resources. The congregation aims to put the conserve into Conservative Judaism.

Free (up to 9 hours) recharging for Electric Vehicles is available next-door at the Whalley & Blake Municipal parking lot.  Members who wish to slow-charge with an outdoor 110v outlet in the BEKI lot can get instructions from the office. 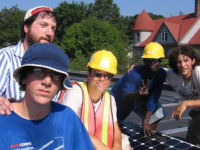 In the autumn of 2005, Tsvi Benson-Tilsen, then a seventh-grade student, began the process of planning and installing a grid-tied photovoltaic array on the BEKI roof as a bar mitzva project. 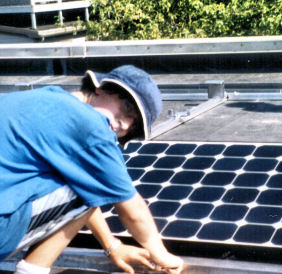 Benefits of the solar array include reducing pollution and the detrimental effects on public health which are associated with the burning of fossil fuels. Production of greenhouse gasses, which contribute to global warming, is reduced. The array reduces the need for new centralized fossil-fuel based power plants, new power transmission lines, and the potential for service interruptions. Most significantly, on hot or cold sunny days, when the demand on the power grid is highest, when power companies turn on the dirtiest and least efficient backup generators, the array is busily and quietly producing pollution-free electricity for the grid. Photovoltaic generation can be a direct replacement for the most expensive and dirtiest power plants. 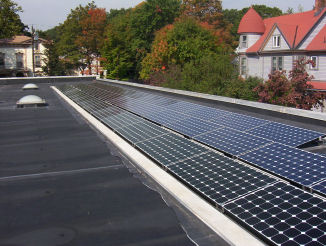 The array comprises 48 panels manufactured by Sunpower Corporation (model 220). The array is oriented 100% optimally toward True South, and the tilt toward the sun is 91% of optimal. The roof is virtually unobstructed allowing more than 95% of the sunlight to reach the panels; the adjusted solar exposure (ASE) is 97%.

The rate of return on the investment (excluding the CCEF‘s support) is expected to be about 5% to 6%, or a payback period of about 15 to 20 years. However, factors such as electric rates, hurricanes, major earthquakes, and rapid catastrophic climate change could affect the rate of return. Since the array was a gift to the synagogue, it was “free” from the perspective of the Congregation’s operating or capital budget. Maintenance costs are expected to be zero in the first fifteen years.

Press coverage of the project

In the spring of 2015, a project was undertaken to purchase and install a 40,000 Watt grid-tied array on the roof of the classroom wing and the roof of the social hall.  The installation went on-line 8 October 2015.  The array comprises 141 LG PV panels (model LG270S1C-B3) and matching Enphase micro inverters (model M215), using a Unirac RM ballasted mounting system.  Special care was taken to protect the new roof on which the array is placed and to comply with roof warranty conditions.  The project qualified for a zREC contract with the local utility.  The project budget was $140,000 and included all system components, labor, roof inspections, engineering studies, permits and other related expenses.   Sun-Wind Solutions (Fairfield) provided the system and services.  The array reduces the building’s carbon emissions by about 30 metric tons per year, according to the EPA model.

See the arrangement of the panels on the roof.  See the current and cumulative system output.

Officer Yaron Lew led the project.  For more information or to contribute to this effort, contact  president@beki.org .

An initiative to promote Conservation and Alternative and Renewable Energy as Jewish values was begun in 2006 as a Legacy Heritage Innovation Project funded by the Legacy Heritage Fund. This initiative uses the existing education structures of the Congregation as vehicles to further awareness and action. The initiative also aims to improve the way groups and individuals in the Congregation work together. The initiative is being incorporated in all existing programs, and many of the specific conservation and alternative energy measures discussed here were implemented through these programs. A midyear (December 2006) progress report is available.

Writings on this Theme