Many years ago I found myself in a feud with a person who accused me of all manner of conniving and deceitful schemes. Although the accusations sounded plausible, there was absolutely no truth to them. I like to think that I am as clever as anyone, and I suppose I am as bad as the average person. But in this instance there were no grounds whatever for the charges made against me. As far as I could tell, in this instance, I had never said, done or wished any harm to this person; I felt no malice. Worse, I really could not understand why or how the outlandish charges could be made.

This life-lesson comes to me when I see the frequent references made to Israel’s purported “genocide,” “ethnic cleansing,” “eradication of an entire people” and “population expulsions” past, present and planned.

During Jordanian rule of Judea & Samaria (the “West Bank”), the population of that region shrank. During the 42 years of Israeli rule, the Arab population has grown dramatically. More Palestinian Arabs have been killed by Arabs (mostly by other Arab residents of Palestine, but also in other countries) than by Israelis. Most of the Arabs killed by Israelis in this period were engaged in violent armed actions at the time of their deaths. If the Israeli policy is ethnic cleansing, then they have done a very poor job of it.

While overall population has grown considerably, there is sizable emigration. This pattern of emigration has been in place for at least the past 200 years and is not unique to the period of Israeli rule, nor to the Israeli controlled territories in the region.

Some 20 percent of Israel citizens are Arabs, and 90 percent of West Bank residents are Arabs. In contrast, zero percent of Gazans are Jews (despite the presence of Jewish residents in Gaza from ancient times until 1929, and then from 1967 until 2005), and zero percent of the residents of Jordan (which constitutes 75 percent of the land area of Mandatory Palestine) are Jews, while about 95 percent are Arabs, and of them about 75 percent are Palestinian Arabs, constituting the bulk of the Palestinian Arab population. (The “no Jews in Palestine east of the Jordan River” law goes back to 1922 under British rule.) Zero percent Jews in Lebanon. Zero percent Jews in Syria. Zero percent Jews in Libya. Zero percent Jews in Iraq. One older Jewish man I know in Jerusalem described how, when his family fled Baghdad 50 years ago, he was traumatized by the sight of Jews hanged from utility poles in the streets. All of those countries that once had thriving Jewish populations are now Jew-free. Areas in Israel such as Jaffa, Hebron and Gush Etzion were made Jew-free by Arab conquest for various periods in the 20th century. There is a long history of massacres perpetrated against Jews by Arabs in the Middle East, but a short history of massacres committed by Jews. With all the talk of “ethnic cleansing,” the reality on the ground is quite the opposite of the accusation. 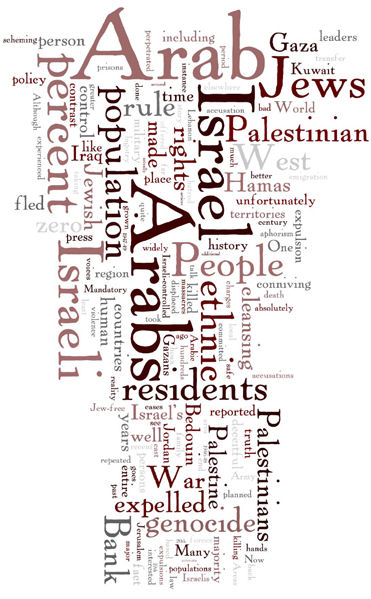 It is true, of course, that Arab and Bedouin Palestinians have experienced expulsions and “ethnic cleansing” throughout history – often at the hands of fellow Arabs or Muslims, as well as by Europeans. Many Arab villages in Northern Israel were wiped out by Bedouin raiders or Druze forces in the 19th century, including most of those on Mount Carmel and in the area of what is today Afula. Virtually the entire Arab and all of the Jewish population of Gaza were expelled by the Turks during World War I, although 80 percent later returned.

During Israel’s War of Independence (1946-48), some 750,000 Arab and Bedouin residents fled or were expelled (official U.N. figure: 711,000), some by the urging of local Arab leaders, some by foreign Arab leaders, and some by local Jewish forces. Many of those persons bore greater or lesser responsibility for their fate. Some of them fled from areas that were at the end of the war under Arab, not Israeli, rule. The majority (over two-thirds) of these displaced persons simply resettled elsewhere in Palestine by 1950. Israel had offered to settle an additional 100,000 Arab refugees at that time in the portion of Mandatory Palestine under its control, but the offer was declined by the Arab states. The majority of these displaced persons were tenants who suffered the tremendous trauma of dislocation, regardless of how the blame is apportioned.

In contrast, Israel has not forcibly expelled Arabs since Rabin dumped (“deported”) 415 HAMAS terrorists into Lebanon in 1992, but subsequently took them back under Israeli court order. (This does not count the expulsion of tourists with expired visas and assorted individual political cases.) The scale of that Arab expulsion of Palestinian Arabs from Kuwait is more than half the number of Palestinian Arabs who fled or were expelled from Israel in 1947-49.

The “Jenin Massacre” (2002) turned out to be a hoax; while it was reported that hundreds or thousands had been massacred, the reality was that about 55 Arabs (including 5 or 10 civilians) died, along with 22 Israeli soldiers. The headline story in mid-August (2009) of the Swedish daily Aftonbladen, claiming that the Israeli Army has been capturing and killing Arabs in the West Bank and harvesting their organs, is widely repeated in the Arab press, without noting that the story is a hoax. At the end of 2007, HAMAS bombed the petrol facility in Israel that served Gaza and shot the people operating the border crossing, and then complained to the international press that Israel was withholding fuel to collectively punish the Palestinian Arab People – how do you say chutzpah in Arabic? There are dozens of recent examples, and these stories are manufactured and repeated intentionally, and unfortunately are widely believed.

As bad as Israeli military rule of the non-Israeli Arab population is, the death and destruction, and wanton killing, perpetrated by the American military in Iraq in the first and second Iraq wars is orders of magnitude greater by any measure than the violence experienced by Arabs in the West Bank. Lebanese, Gazans and Iraqis suffer far more death, violence and suppression at the hands of their own rulers or warring factions than do Arabs in the West Bank. It is inaccurate to view the problem in the West Bank as somehow beyond the norm of what goes on in much of the world. Unfortunately, the Israeli Army may be no better, or not much better, than those of the developed Western countries such as the U.S., UK or France, with respect to following rules of war, human rights, humane conduct or basic decency. Arabs are killed regularly in Palestinian prisons (both by the Palestinian Authority and HAMAS) but not in Israeli prisons.

Instead of being expelled in 1967 when Israel took control (“liberated,” or “conquered,” if you prefer), Jerusalem Arabs were offered citizenship, as well as the alternative of special rights as non-citizen residents, including the right to vote and hold office and a wide array of social and municipal services. Perhaps this system doesn’t work well, and Arabs experience discrimination, but the arrangement stands out to Israel’s credit as an extraordinary effort at peaceful coexistence. It is not a policy of expulsion or genocide against an entire people, let alone the residents of this one city.

A Google search finds the vast majority of cases in which the terms “ethnic cleansing” or “transfer” are used in this context are the words of Israel’s enemies, not Israeli leaders.

From time to time, right-wing voices are reported to talk about the desirability of transferring Arab populations out of Israel or Israeli-controlled territory. Rehavam Ze’evi (assassinated in 2001 by the PFLP) and his Moledet party advocated transfer the Arab population from the West Bank and Gaza “by agreement” or during war to neighboring countries. The fact that a major highway (No. 90) through the Jordan Valley is named “Gandhi’s Road” in his honor is taken as menacing by Palestinian and Bedouin residents of the region. More recently, Henry Kissinger (among others) has suggested gerrymandering the borders of Israel to exclude some Arab population centers. However, these are still considered “fringe” voices in Israel and are not the platform or policy of the government or major parties. In contrast, HAMAS, which governs Gaza, and some of the PLO-affiliates are quite explicit about their intentions to expel, kill or subjugate non-Muslim or non-Arab residents of the territories they control or plan to conquer.

The bizarre accusation against Israel of genocide is frightening when we consider that genocide is actually taking place in Darfur (incidentally, related to pan-Arab racial imperialism) and in other places. All people interested in human rights and civil rights, as well as those interested in Jews and Arabs should pay attention to what is taking place in the territories under Israeli military control. But those concerned about recent and ongoing genocide and ethnic cleansing ought to look elsewhere. The situation is all the more ominous when we ask ourselves why these hostile and defamatory accusations are being propagated.

All of what is stated above is objective demonstrable fact. Unfortunately, fact and truth are easily drowned by hysterical and false cries of “genocide” and the like, which are based on ignorance, bigotry and hatred. HAMAS activists, European college students and celebrities generate zeal and intensity in their hatred of Israel and of Jewry. Is it possible for people genuinely committed to truth, human rights and the rule of law to be zealous so that justice and compassion can ultimately prevail, so that the world can be safe for Israel and all people safe from the threats of genocide, denial of human rights and bigotry?