Saul’s Circle provides synagogue outreach and directed services to address the spiritual and Jewish communal religious needs of adults Jews and others who are mental health services consumers. Programs are held at the synagogue and at other sites in Greater New Haven. Saul’s Circle helps adults locate the resources in Jewish tradition and synagogue community that add meaning and structure to their lives, including those that can be of particular value to mental health services consumers. Concomitantly, the project helps synagogue members and staff learn to better understand and welcome this segment of our community.

Saul’s Circle aims to educate and sensitize members of the Jewish community who are associated with institutions such as synagogues other than the host Congregation.

Saul’s Circle provides an avenue for a significant segment of the Jewish community to enjoy the benefits of involvement in the community and of direct interaction with Jewish tradition and religious life. Jewish adults who are mental health services consumers often feel shunned and unwelcome in synagogues and other communal institutions. 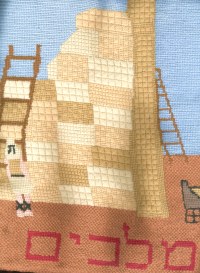 The name Saul’s Circle refers to the Biblical King Saul, the first King of Israel, who suffered from serious mental illness. Despite his illness, he is recognized as a great, although tragic, leader of his people. According to the Hebrew Bible, Saul was chosen as a leader of his people by the Almighty. Every person, no matter what their abilities and disabilities, is created in God’s image to fulfill part of God’s plan, and as such every person must be respected and honored.

In the summer of 1997, Congregation Beth El–Keser Israel (BEKI) initiated the Kulanu Ke’Ehad Havura: The All as One Study & Friendship Circle for Adults with Special Needs at Congregation Beth El–Keser Israel with major funding from the Jewish Foundation of Greater New Haven. The Kulanu Ke’Ehad Havura was directed very broadly toward adults with special needs, which included adults with developmental disabilities, mental illness, and other conditions. The experience of Kulanu showed, among other things, that there is a significant number of Jewish adult mental health services consumers in the Greater New Haven area who are currently not enjoying the benefits of involvement in the Jewish Community and whose needs are entirely distinct from those of other adults with “special needs.”

Saul’s Circle seeks to involve Jewish adults in the ongoing general services and programs of the synagogue. It also creates special programs designed for the unique situation of adult Jews who are mental health services consumers. Local mental health professionals have enthusiastically endorsed the Saul’s Circle concept and are eagerly lending their experience and labor to make it succeed.

Adult mental health consumers are concentrated in the City of New Haven. Many others are served by mental health agencies located in the City. Jewish professionals working at Yale New Haven Hospital and at the Hospital of St. Raphael estimate there are 200 to 300 adult Jews in the area that could be served by this program. In preparation for Saul’s Circle, contact was established and a relationship created with over 60 adults. Congregation Beth El–Keser Israel is located within walking distance and along the bus routes of a high proportion of the target population.

Saul’s Circle helps members of the Congregation and the Community at large to understand mental health services consumers. In this way, over one thousand additional people are involved in some aspect ofSaul’s Circle.

Additional sources of funding are being sought. If you would like to contribute toward the costs of the current program or its continuation in the future, please call Rabbi Woodward at (203) 389-2108 ext. 120 or email to rabbi@beki.org. Correspondence regarding funding may be sent to “Rabbi Woodward, Saul’s Circle at BEKI, 85 Harrison Street, New Haven CT 06515-1724.” Contributions are tax-deductible to the full extent allowed by law. Congregation BEKI is a recognized 501 (c) 3 charity organization.

Saul’s Circle was developed by Jewish Educator Anne Johnston along with our rabbi. Dr. Lauren Kempton directed Saul’s Circle from August 2001 to June 2010.

BEKI has taken a lead regionally in programs for adults and children with special needs. The BEKI Sisterhood has offered an annual Special Needs Seder for Adults in cooperation with the Jewish Family Service and Abel Caterers since 1983. Thanks to its central urban location, the Congregation is most accessible to adults with special needs. In 1994, the Congregation became the first in our region to offer a Special Education Hebrew School, the Talmud Torah Meyuhad, which it founded as part of its religious school.  Additional support for special education for youth at BEKI is provided by the The Borick Family Endownment for Special Education for Youth at Congregation Beth El–Keser Israel. In 1997, the Congregation initiated the Kulanu Ke’Ehad Havura, discussed above, with major funding from the Jewish Foundation of Greater New Haven.